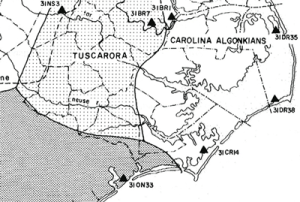 When European settlers first began to arrive in what is now Jones County, the natives were Tuscarora Indians. These Indians had earlier migrated from the area now known as New York and Pennsylvania, where they were part of the league of Iroquois Indians. The Tuscarora lived in bark wigwams and grew abundant crops of corn, peaches and other edible plants.
Jones and Craven Counties were settled about 1710 by German Palatines and by the Swiss who were led by Baron Christopher de Graffenried. These people suffered many hardships during their first years in the new land. Soon, they were caught in the midst of Cary’s Rebellion and the Tuscarora War. Homes were burned, crops were destroyed and people were killed. The Baron returned to Europe a broken man, and the settlements ceased to exist as distinct communities. Settlers were scattered along the Trent River. The river was named after the Trent River in England.
Three of the leading colonial leaders were Baron Christopher de Graffenried, the young Swiss nobleman who brought some of the first settlers to the area; Nathan Bryan, a wealthy talented man who represented the New Bern District in the 4th and 5th U.S. Congress of 1775 and 1799, a man of great piety and a good public servant; and Abner Nash, who was born in eastern North Carolina. 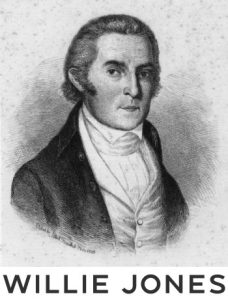 Jones County takes its name from an aristocratic radical named Willie Jones (whose first name was pronounced “Wylie”). In a day when wealthy landowners among the patriots of the American Revolution generally were conservatives, Willie Jones was a political activist.

Supporters of the Constitution rallied for ratification. They became known as the Federalists. Their opponents were called Anti-Federalists. One of the most distinguished and influential Anti-Federalists in the colonies, the man responsible for North Carolina’s refusal to join the Union for a year after its formation, was a shrewd and wealthy planter from Halifax, Willie Jones.

It was only a matter of time before North Carolina came “under the Federal roof” as the twelfth state one year later in the autumn of 1789.

The County Seat was Established in 1784

The courthouse in New Bern was too far away when transportation was limited to the use of horses, boats or one’s own feet. In 1778, a commission was appointed to lay out the boundaries of the new county, and choose a place for building the new courthouse, prison and stocks. A bill was passed by the N.C. Legislature in 1784 which established a new town called Trenton to serve as the county seat. One hundred acres were set aside for building lots and streets. Eight men were appointed directors of the Town.

Jones County contains three incorporated towns. Besides Trenton, there is Pollocksville, also located on the Trent and named after George Pollock, a large landowner in the area. Pollocksville, chartered in 1834, previously was known as Trent Bridge. Maysville is the youngest town, chartered in 1880, and is the largest town in the county. It is located near the northern boundary of Onslow County and the southern boundary of Jones County on the White Oak River. Maysville was named for the May family and was previously known as “Cross Roads.” A fourth town known as Comfort is located in the southwest region.

Jones County was the birthplace of a great political leader, Furnifold McLendel Simmons, born in 1854. Simmons was elected to the U.S. Congress in 1886 and later was elected to the Senate. In the Administration of President Wilson, he chaired the Senate Finance Committee and co-authored the War Revenue Act to finance U.S. involvement in World War I. His fifth term in the Senate was won by the largest re-election margin ever granted to a North Carolinian. 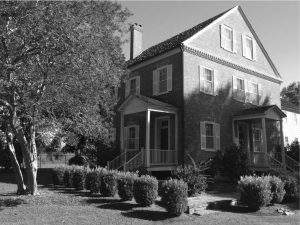 Jones County built an agricultural economy centered around the “Southern Plantation.” Some were more than 50,000 acres. The Foscue Plantation House is shown on the right. Social and cultural life centered around the plantations and limited development of the towns within the County. The Trent River, which bordered the Foscue Plantation, was the most important transportation system for the movement of produce and supplies. In 1860 Jones County was one of the wealthiest in the nation–the wealth primarily in land and slaves. The Civil War caused many changes in the County. A new system developed around the tenant farmer; cotton began a steady decline. The worst part was the destruction experienced during the War. Jones County was a continuous war zone for Southern troops stationed in Kinston and Northern troops stationed in New Bern. In some ways the County has yet to recover.

In 1886 Jonathan Haven, in a promotion booklet, described Jones County as a land inhabited by kind, hospitable, and intelligent people. Land was cheap and fruitful. “Tickle it with a plow” he said, “and it will laugh with a harvest.”

Jones County, typical of many rural counties in North Carolina, is relatively poor. The county is still basically an agricultural county deriving most of its income from farming and timber activities.

During the colonial days, water provided by the Trent River and various lakes served as a main means of transportation for people, crops and supplies. The Trent River which flowed through Onslow County, Jones County and Craven County was a main supply tributary. Steamboats on regular schedules plied the waters between New Bern and Trenton, the County seat of Jones County. These flat bottom vessels some sixty feet in length with a narrow beam drew only eighteen inches of water, and barges were used to transport people, crops and supplies.

A recent discovery in River Bend in nearby Craven County revealed the remains of a ferry which is believed to have been used to transport wagons and people across the Trent River. According to historians, the remains of this ferry, constructed of cedar wood, and on display at the Beaufort Maritime Museum dates back one hundred fifty years.

In 1880, Trenton had two saloons operated by W.H. Cox and C.C. Green; the druggist was Charles C. Green; and there were two hotels operated by Mrs. M.E. Pritchard and Joseph A. Smith.

There are many historic homes and establishments in Jones County: One of the most interesting old homes is the John Martin Franck House on Tuckahoe Creek; another is the Foscue Plantation House on U.S. Highway 17. The Waller-Sanderson Home is distinguished by its graceful double chimney serving two downstairs rooms; the Lavender-Barrus House with its double front porch and its exterior stairs.

Predating the settlements of the early colonists the earliest inhabitants were the Tuscarora Indians. They lived along the banks of the Trent River. Here they planted crops and fished the river for small mouth bass, striped bass, and catfish. Deer, muskrat and beaver were abundant in the area. It is reported that their territory was huge covering the area between the Neuse River Basin and the Cape Fear River from North Carolina’s coastal areas to the Appalachian Mountains. The farm land that the Tuscarora’s had developed was later taken over by the colonists.

Although the Tuscarora Indians were largely credited for the survival of the colonists who had settled on their land, the Indians had been abused by the white settlers for many years. The colonists often sold them useless rifles whose barrels were bent. Land was frequently purchased from the Indians often at prices well below its value. Trading for furs and other commodities was often one-sided. Worst of all was the raiding of the Indian villages and capture of women and children to be brought back as slaves to work the plantations. The sale of home brewed whiskey to the Indians was further cause for much drunkenness and disturbances that took place in the villages.

Then it happened, without warning, the Tuscarora Indians attacked all of the settlements along the Neuse and Trent Rivers including all of their tributaries. They began their rampage by sending scouts in among the settlers. As they moved from settlement to settlement, the Tuscaroras in the homes serving as slaves, also joined their brothers in the massacre of the settlers. No one was spared. They applied torches to all of the buildings. Liquor that the Tuscaroras found added to the fury of the bloodbath which continued on for three days. After killing all the settlers they could find in a settlement, they would proceed down to the next settlement. By the end of the day, they had reached New Bern where they wiped out a third of the population.

The Indians had a about 260 fighting men between the Neuse and Pamlico Rivers in the villages adjacent to the white settlements destined for destruction. The settlers had approximately 1000 able to bear arms. According to historians, the majority of the Tuscaroras did not participate in the attack on the settlers. “Dr. Byrd, historian, said traditional North Carolina history has given the Tuscaroras a “bad rap”, depicting them as blood thirsty murderers. It’s important that people understand the abuses endured by the Indians at the hands of the settlers for a decade and the events that led up to the massacre.” The Indians were cheated in trading and were not allowed to hunt near the settler’ plantations and under that pretense took away from them, their game, arms and ammunition. The Indians were insulted in may ways by a few rough Carolinians more barbarous and unkind than the Indians themselves. If the Indians were raiding the settlements of the whites and carrying off their women and children to serve as slaves, it is certain the settlers would have risen up to retaliate.

Teresa (Waterlily) Morris, of Tuscarora whose ancestral roots are from Eastern North Carolina, serves as a daily reminder of a people that have been ignored . Teresa is an educator teaching courses on the American Indian “Unfortunately many have passed on not knowing the whole truth about their ancestral roots. I am answering my call as an educator outside the “traditional classroom” by carefully planting seeds that not all Tuscarora moved away after the Tuscarora War. The migration that took place so long ago did not extinguish the ancestral fires within the people who left the only land they knew as home.”

A few years ago Ms. Morris founded the Coastal Carolina Indian Center & Association. Lots of information is on this site regarding local history for eastern and coastal North Carolina as well as folks interested in doing searches for Family History.

While George Washington was President of the United States, which consisted of 13 small states, he was deeply interested in the welfare and protection of the nation; but he was also interested in its people becoming good citizens. To see for himself the resources and possibilities of the new nation, Washington traveled through the 11 states stopping along the road at public “ordinaries,” as inns were called in those days, where he met and talked with local citizens. It was on one of these tours that the first President passed through Jones County where he spent the night at Shine’s Inn in Comfort.